Get to Know All The Sea Beast Characters

The Sea Beast, one of Netflix’s biggest summer releases, has just been released, and we have a The Sea Beast character guide for the fans of the movie. The adventure film is an animated extravaganza that has received a lot of excellent reviews from reviewers on various websites as well as early audience reaction as the movie was first released in cinemas before its release on the streaming website Netflix.

Karl Urban and Zaris-Angel Hator play the main protagonists, and we watched them as famed monster hunter Jacob Holland and the young, daring Maisie Brumble, who stows away and wants to be on Holland’s ship. Maisie befriends one of the scariest sea creatures on the planet while at sea, and it makes Jacob think about whether he knows everything related to those sea monsters.

When you see the Red Bluster on the horizon, the legendary sea monster hunters should be on their way as The Sea Beast is full of brave characters and opportunities for glory. The little orphan Maisie Brumble tells everyone that you may be a hero and wrong at the same time, indicating that they do not know everything about the sea creatures, especially about the Red Bluster. When our two main The Sea Beast characters make friends, they go on an epic trip into unexplored waters, making history in the process for us to watch.

Maisie comes from a long line of hunters who were killed by the king and queen, and these two penned stories about sea animals assaulting their coasts and how they could never get rid of them, always being in need of sea hunters. Because they were replaceable, they dispatched lower-class hunters to do the work, and Maisie now realizes who the king and queen actually are, and she wants to put an end to their awful ruling.

She realizes that these animals are merely living after getting to know Red, and they are in danger because of the king and the queen. Maisie was bold enough to confront the king and queen on her own as she delivered a lovely, uplifting speech in which she called them both out and made the kingdom recognize their wrongdoings. Jacob and Maisie will go on many more adventures together, indicating there can be The Sea Beast 2.

Now you are familiar with the movie, meet Jacob, Maisie, and the rest of the Inevitable’s crew below with our The Sea Beast character guide.

Jacob Holland is one of the most well-known sea monster hunters in the world and he is the best The Sea Beast character. According to legend, he killed at least four marine animals, so he is very strong. As a young orphaned child, he joined Captain Crow’s crew and he has the potential to lead the crew of the Inevitable, but does he really want to do that after meeting Maisie?

Jacob Holland grew raised aboard a hunting ship named the Inevitable, ruled by the brutal Captain Crow who represents the old guard hunter, someone who has been doing this for so long. 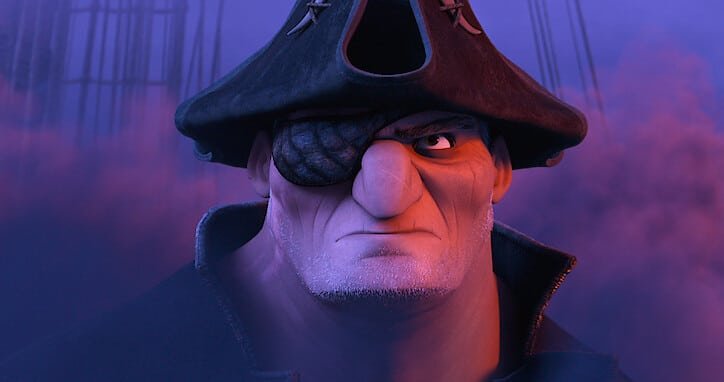 Captain Crow’s heart burns with vengeance and paternal pride, and the fire grew even more as he watched his young ward, Jacob Holland, blossomed into the hunter he always felt he could be. Crow’s pursuit of the Red Bluster, however, might be the end of him. Crow is probably among the least liked The Sea Beast characters because of his greed. Maisie Brumble is definitely the best The Sea Beast character. She passes her evenings reading about Captain Crow and Jacob Holland, so she is influenced by them as they are the great explorers who came before her. Her ambition is to become a sea beast hunter like her late parents, and she almost made it to her goal.

You know how The Sea Beast is set in the midst of a major conflict between monsters and humanity, with the latter being supported by a King and Queen who plainly don’t mind putting people in danger but would never put themselves at risk for their people, making them among the least liked The Sea Beast characters.

Sarah Sharpe is the most devoted mate you’ll ever meet, making her one of the best The Sea Beast characters, but don’t forget that she also has her own feelings and thoughts.

Gwen Batterbie is not someone you want to cross as calling on this sorceress of unfathomable power might be costly.

In this The Sea Beast character guide, we had to talk about Admiral Hornagold who controls the Royal Navy. He is a thorn in Captain Crow’s side, and he likes the king.