The Takedown ending left all of us in shock and fans are wondering whether Ousmane is alive or not. Takedown is a French police film which initially released on Netflix and the plot revolves around Ousmane Diakhité played by Omar Sy, who is a rebel head of the Paris criminal division.

The Takedown ending has a lot to offer to the viewers. Along with Ousmane, his old friend, François Monge played by Laurent Lafitte is sharing the screen. Monge is an egotist person and the deputy commander of the divisional court’s officers. These two meet up again after the success of the original film called On the Other Side of the Tracks which was originally released in 2012. They go on a quest to solve a murder, and the movie managed to get positive feedback from everybody. 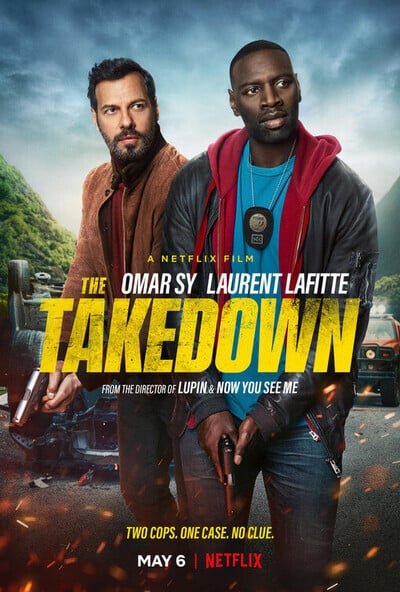 The movie is directed by Louis Leterrier who gave us an amazing The Takedown ending, and the film attempts to investigate racial conflict and immigrant prejudice in regional sections of France. In a place white supremacy still rules to some extent, these two actually have a very difficult job. But in the movie, that topic was not given any significance and the director focused on the humorous relationship between these two misfit officers.

What is The Takedown about?

The Takedown is Netflix’s latest comedy which is about Ousmane and Francois who are two Paris cops compelled to work together after the death of Kevin Marchal. Ousmane Diakhité is a rebel police officer who does not follow the rules, and he seemed really heroic when he attempted to arrest Jordan without waiting for assistance. In The Takedown ending, we wondered what would happen to Ousmane with his behavior.

Following Jordan’s arrest, Ousmane’s boss describes him as uncontrollable and obsessed but does nothing about it because the police want to wash their misdeeds away by making him the police department’s poster boy. Do you know why? It is all because of his skin color but Ousmane has no desire to promote anyone’s cause. Kevin’s body has been slashed in half, and the two officers can only discover one half. Ousmane and Francois travel to a tiny French town to find someone who can confirm that the body belongs to Kevin, and following a visit with Kevin’s mother and girlfriend, they finally have a starting point. From what they have learned, Kevin is revealed to be a drug maker and dealer who works for the Sons of Clovis.

Ousmane and Francois reveal that they are a right-wing hate group planning a series of terrorist assaults and Captain Mercier, the commander of the Paris criminal section, knew this all along because Mercier is a member of the terrorist group. Wondering what happened at The Takedown ending? Keep reading.

Does Netflix have Takedown?

The Takedown which is an action-comedy starring Omar Sy and Laurent Lafitte aired on Netflix and is still available to watch there. So, yes, you can watch this amazing humorous movie about two cops on the streaming site Netflix. The Takedown ending was an amazing one, so we recommend watching the movie on Netflix soon.

You can watch the trailer of the Takedown below.

Does Ousmane Survive in The Takedown Ending?

In the Takedown ending, Francois and Ousmane go to the abandoned warehouse where the Sons of Clovis are putting the finishing touches on their plot, busy with work. Alice, a local police officer, is doing everything she can to prevent Ousmane from getting there and things get clear when she pulls a pistol on him, indicating that she is not on his side. We were shocked when we realized that she is a member of a terrorist organization.

Later we watched Francois sneaking into the warehouse and infiltrating the group, but the group turns on him. While these are happening, Ousmane manages to escape and goes there to save Francois but a fight breaks out between the two officers and the militia group. The cops ultimately catch up with the villainous Mayor but his true intention is actually to explode some bombs.

He actually pushes the button and the building bursts and begins to crumble, almost killing Ousmane and Francois but they were later revealed to be unharmed. They manage to catch and bring the Mayor before he can flee from their grasp. As a result, the group’s objectives have been put to an end.

Kevin was wounded in the leg during a chase between him and an unknown gunman. Because of his injury, he fell off a bridge, became entangled in some electric wires, dying in a horrible way. Carl Muller is likely the shooter but Ousmane suspected the pistol was planted to implicate the man, so we never learn the real identity of the killer. In the Takedown ending, the only one who died was Kevin as a result.