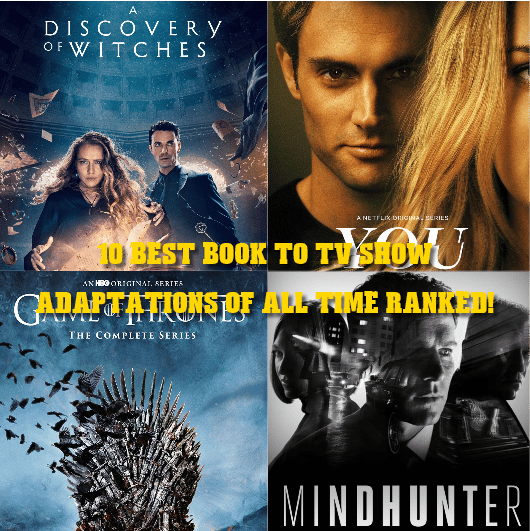 Books. Whole new universes to take us on different rides. When those universes become a reality in front of a screen, even better! To see the characters that you made up in your head come alive, and if it is exactly like you imagined it would be, really makes butterflies come alive in your stomach.

In Westeros, nine noble families fight for control over the lands of the continent. Meanwhile, an enemy from their past comes back to break the peace after a millennium. The show follows several story arcs, based on the book series by George R.R. Martin. It takes you on a rollercoaster of a ride!

The series is 8 seasons long and it aired between 2011-2019. After its ending, fans were waiting for other story arcs to come alive as well. Guess what? They got it! Focusing on the Targaryen family history, “House of the Dragon” is set to air on August 21, 2022. 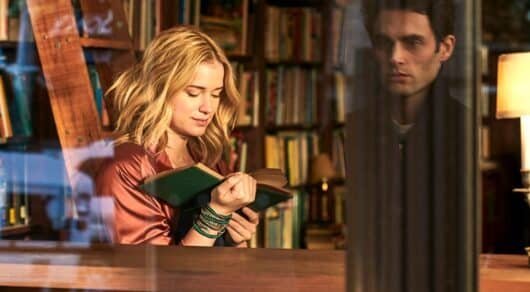 “What would you do for love?” asks the 21st-century love story. A brilliant bookstore manager meets with a writer. When this occurs, the answer to that question becomes clear; anything. He uses the gift of social media and the internet as his way of getting intimate details about her.

After a while, this innocent crush becomes an obsession as he removes all obstacles (or humans) on his way. The series is based on Caroline Kepnes’ best-selling novel. It consists of 3 seasons. The 2nd and 3rd seasons are based on the love story of Joe and Love. So, it is safe to say that the story arc changes every season. You can catch all episodes of “You” on Netflix. The show has already been renewed by Netflix for a 4th season! 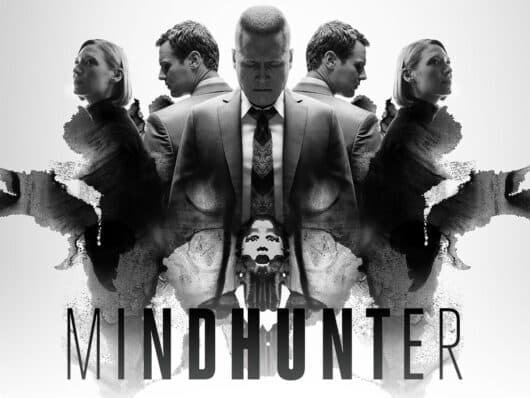 True crime lovers, this show was made for you to feast on! Mindhunter follows two FBI agents along with a psychologist. This team operates the FBI’s Behavioral Science Unit at the FBI Academy in Quantico, Virginia. The three of them launched a project to interview serial killers in prison to understand their psychology. By doing so, they hope to have the knowledge to solve other ongoing cases.

The series was based on the true-crime book “Mindhunter: Inside the FBI’s Elite Serial Crime Unit” by John E. Douglas and Mark Olshaker. Mindhunter lasted for 2 seasons between 2017-2019. However, fans always waited for the show to continue. It is still on indefinite hold but, David Fincher may “revisit the series in the future.” 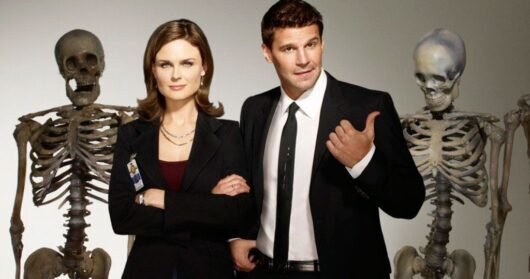 The show is loosely based on the life and novels of Kathy Reichs, also a forensic anthropologist. The show aired between 2005-2012 for 12 seasons. It holds the record for the “longest-running one-hour drama series” produced by 20th Century Fox Television.

5. A Discovery of Witches A Discovery of Witches

A world where vampires, witches, and other kinds of creatures live discreetly alongside humans, and in the center of it lives Diana Bishop, the last witch on a lengthy line of witches. However, she refuses to embrace her heritage and chooses to bury herself in work. Her work as a historian and her interest in alchemy leads her to Oxford University for research. There she uncovers a mythical book and begins the story of a lifetime.

Along the road, she develops feelings for a certain vampire and together they face a conflict with the rest of the creature world. A Discovery of Witches is based on the All Souls trilogy by Deborah Harkness. The series is named after the first book. It lasted between 2018-2022 for 3 seasons. You can catch them on Sky Max or on online streaming services like AMC+ and Prime Video!

6. A Series of Unfortunate Events 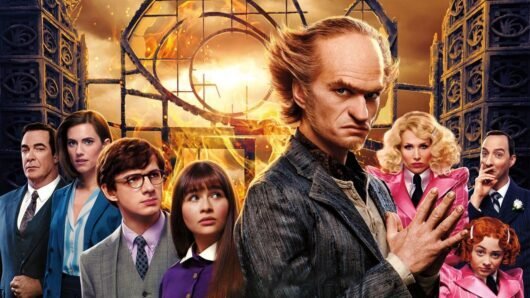 A Series of Unfortunate Events

After the mysterious fire that took away their family, Violet, Klaus, and Sunny get placed in the care of a distant relative Count Olaf. This relative’s sole purpose is to have the Baudelaire family fortune for himself. His attempt fails and the children get placed in the custody of several unsympathetic guardians.

The melancholic narrator Lemony Snicket explains the family’s adventures to the viewers. The show is based on the children’s novel series of the same name, and it aired on the streaming service Netflix. A Series of Unfortunate Events lasted for 3 seasons between 2017 and 2019. 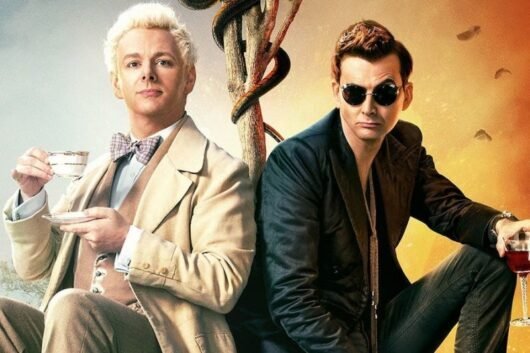 With the coming of the Antichrist and Armageddon, an angel and a demon must come together to prevent it. They were sent to represent heaven and hell on earth, and during their long years of living there, they grew accustomed to it. The show is based on the book of the same name, written by Terry Pratchett. Good Omens ran from 2019 to 2022 for 2 seasons. You can catch all the episodes on Prime Video. 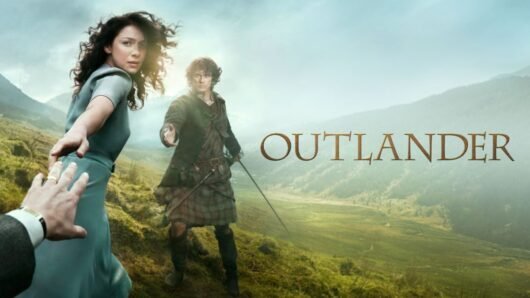 We see on our screens the story of Claire Randall, a combat nurse from 1945 who is married, and she mysteriously swept back in time to 1743. There, she finds herself in great danger in an unknown world. After a while, she marries a romantic Scottish warrior, Jamie Fraser. In doing so, she becomes a part of the Jacobite rising.

The historical drama series Outlander is based on the novel series of the same name, written by Diana Gabaldon. Starting in 2014, the show has 6 seasons in total. Each season is based on different books of the novel series. The 7th season will consist of 16 episodes while the 6th season of the show had to be shortened due to the Covid Pandemic. Rumor is, that the 7th season will air in 2023. We can’t wait! 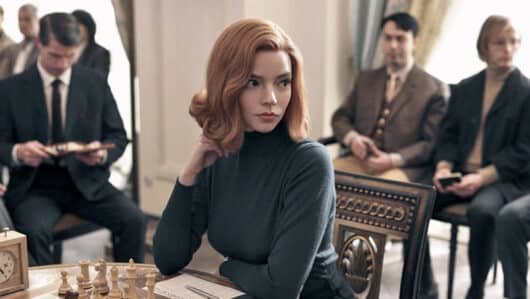 The show follows nine-year-old chess prodigy Elizabeth (Beth), as she pursues a career in chess. Beth lost her mother in a car accident at age 8, therefore she was orphaned and taken to an orphanage. Sometime during her stay there, she is taught chess by the orphanage custodian. After a few years, a childless suburban couple adopts Beth, and once she’s in their care, she enters her first-ever chess tournament and wins!

From there on, Beth, alongside her adoptive mother rises to fame. While doing so, her drug and alcohol abuse worsens, and she seeks help from an old friend. She then trains for a major international tournament. The Queen’s Gambit miniseries is based on the book by Walter Tevis. You can find all 7 episodes on Netflix. 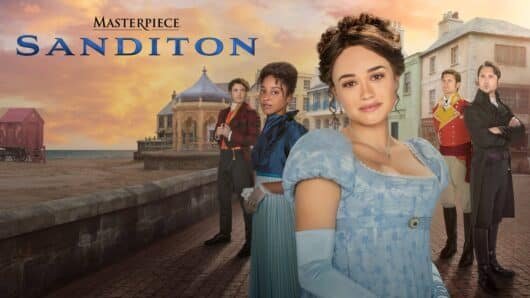 The story follows Charlotte Heywood as she comes to Sanditon by a happy accident. Charlotte is keen to experience everything this seaside resort has to offer. However, she is shocked by its ambitious inhabitants and curious as to what secrets they share. The historical drama series is based on the unfinished novel by Jane Austen, written just a few months before her pass.

Due to the novel being unfinished, the show’s writer Andrew Davies used the developed characters and completed the story on his own. The show aired in 2019 and currently has 2 seasons. Sanditon is renewed for season 3 but the premiere date has not been announced yet.

Continue your reading here: Stephen King’s The Mist Book vs The Movie – Which is Better?

Share 0
In this article:10 best book to TV show adaptations